This month in Nevada was all about reaching out to other groups. As branches busily prepare for winter and holiday fundraisers and social events, our state organizer, Katherine Yelle, was building relationships with a number of new groups.  Katherine met with UNLV’s multicultural program and will returning to give a talk about AAUW on campus in January.  She also met with the Nevada Institute for Children’s Research and Policy, and Nevadans for the Common Good.  Additionally, Katherine joined PLAN and ProgressNow for a roundtable discussion about the minimum wage with Congressman Steven Horsford.

AAUW Nevada in the Media!

We were in the paper!  After Len Semas made some unfortunate remarks about working women causing social problems, AAUW of Nevada felt compelled to respond.  Katherine worked with State President Joyce Destefanis and the state board to draft a letter in response to the sexist comments.  The letter was submitted to the Reno Journal Gazette and published on November 25th under the headline, “Take a Stand Against Real Women’s Problems.” We can only hope he takes our advice! 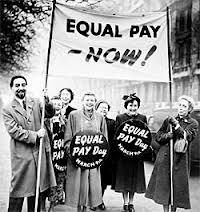 How can you help the pay equity movement?

2014 is going to be a big year for the pay equity movement.  On   January 29th, we mark the 5th anniversary of the Lilly Ledbetter Fair Pay Act.  Then on April 8th, we commemorate Equal Pay Day, the symbolic anniversary of when women’s annual wages catch up to men’s.  Finally, on July 2nd, we celebrate the 50th anniversary of the Civil Rights Act of 1964.  As we gear up for this series of events, Katherine is collecting stories of pay inequity or pay equality.  If you have something you can share, please contact her at yellek@aauw.org!

Political vs. Partisan: In the fall of 2013, Democrats and Republicans failed to pass a budget and the federal government shut down for over 2 weeks.  In early July of 1804, Democratic-Republican Aaron Burr shot and killed Federalist Alexander Hamilton in a duel.  Are these often costly and sometimes bloody conflicts about politics or is it all just partisanship?  What’s the difference anyway?

AAUW is a non-partisan organization that supports women. Our work is political, but it is not partisan.  This workshop will focus on explaining the two terms in order to distinguish between what activities are political, and which ones are partisan.  We will also explore how our values influence our work, and where the line between partisan and political lies.  We will talk about issues, where candidates fit in, and real world examples of non-partisan political issues.

This workshop will help us develop strategies and guidelines for working together regardless of party affiliation.  Only when we stand united can we empower and advocate for women and girls.

AAUW Nevada on the Web!

As we gear up for 2014, AAUW of Nevada is using technology to reach out to members and non-members.  You can soon expect to see AAUW of Nevada action alerts in your email in-box!  These will help you take action on important issues in a variety of ways: by signing a petition, contacting your legislators, and writing letters to the editor.

In just a month, our Facebook page is up to 85 “likes” and our Twitter account has 25 followers!  If you have content to share, or your branch has a special event or meeting coming up, please pass that information on to Katherine and she will ensure it gets posted.

November was a big month for AAUW Nevada! We reached out to new groups and organizations, asked a Congressman what he was willing to do to make sure working mothers earn a fair wage, and were in the paper standing up for our values.  That’s impressive!  It happened because members were willing to give just a little bit of their time – whether it be to proofread a letter, or send on contact information.   When we are responsive and accountable to each other, we can make great things happen. Let’s keep it up! 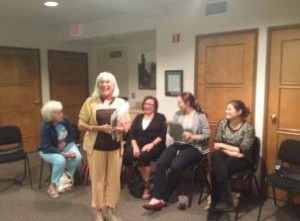 Katherine would like to thank Valerie McNay for continually opening her Boulder City home.  Valerie goes out of her way to make sure Katherine has a place to work and feels right at home when she visits Nevada.  It is very much appreciated!